Longevity & Quality: A history of Tufnol

‘Give me an insulating material that will combine the advantages of some of the varieties now widely used, yet avoid the disadvantages implicit to them’

Tufnol opened its doors in 1929 in Perry Barr (Birmingham, UK) to exclusively service the George Ellison Switchgear company, which was situated just across the road, the main product offering was electrical insulators. Fast forward nearly 100 years Tufnol, is now a household name in a multitude of sectors including Aerospace, Construction, Electrical, Marine, Rail and Offshore, bringing an alternative to traditional metals like cast iron, steel, brass and bronze in the mechanical engineering industry.

Tufnol’s focus on quality and performance is at the core of the organisation which has significantly contributed to the wonderful achievements in engineering and technology from which the world benefits today.

In 1944 its name was changed to Tufnol, to create a separate brand identity for its expanding product range. During the second world war, the factory in Birmingham was key to producing a multitude of components for the war effort including in the ‘bombe’ equipment used at Bletchley Park to help decode messages from the German ‘Enigma’ machine. That’s not all, Tufnol also produced parts for the iconic Spitfire fighter aircraft, leading the way for Tufnol’s long established contribution to the aviation sector.

In the 1960s, Tufnol introduced its own in-house R&D facility, this provided the basis for the modern, high performance Tufnol range which is available today. A new material made from polyimide resin, 6G/92, that can survive exposure to very high temperatures for long periods was developed, creating another world-beating grade that effectively pushed out the leading edge of applications for which engineering plastics could be used. This material is now predominantly used in high temperature environments such as metal furnaces. However, it is also a staple material supplied to the aerospace sector.

The late 70s saw a rise in composite materials being used within shipbuilding, moving away from more traditional materials towards something more hard wearing. Tufnol’s ‘Bear’ grade was approved in 1979 for use in rudder bearings in marine applications and is still in use today. This sector grew so much that Tufnol opened an office on the quayside in Newcastle which stocked a variety of materials, usually very thick grades (up to 9in) specifically for British Shipbuilders.

In the 90s there was a change in legislation which meant that product names now needed to reference material compounds, hence a move away from the traditional animal names used in the Tufnol product range over the years. This is really a testament to the longevity of products as the names are still used today by customers all over the globe.

The 90s & 00s also saw a step change in the company with the acquisition of its first ever CNC machines which revolutionised efficiencies and production. Tufnol had been machining its own parts for over 70 years using manual lathes, it was in fact once named the biggest non-metallic machine shop in Europe.

Though the electrical industry was still the biggest sector, marine, rail and aerospace were catching up. After Tufnol’s success in military aircraft, they started entering the hugely growing commercial aircraft industry. Tufnol have also been involved with other more niche projects over the years including; xylophones, tap shoes and prosthetic limbs!!

In 2021 Tufnol was bought by Diamorph Group, a group of material science companies dedicated in transferring knowledge and capabilities in a wide variety of industrial sectors. New ownership brings with it new opportunities: significant investment, state of the art machinery and optimised operations. As this new era dawns, the group is committed to preserving Tufnol’s long and successful history, as well as servicing clients old and new. Material development and innovation is at the heart of this new partnership.

As the original factory still stands, stooped in history & heritage, the steam powered machinery which was installed in the 1920s still produces the quality products that are sold today. Tufnol has stood the test of time, in name & quality distributing products world-wide, and the future continues to shine bright!

Demonstrating evolution and innovation, Tufnol is seeking to become a pioneer in 21st century engineering. By adding to material performance and environmental sustainability, Tufnol can further service its customers by machining specific material components such as; laminated plastics and resin bonded materials and other engineering plastics. Decades of technical experience and capabilities mean the skilled CNC specialists and machines can create bespoke shapes and configurations for any application or sector.

As the adventure continues, Tufnol is here to remind us how valid the lessons learned in 1920 have in been in building on and developing the company, and how to survive bringing the best quality products and services to the market. 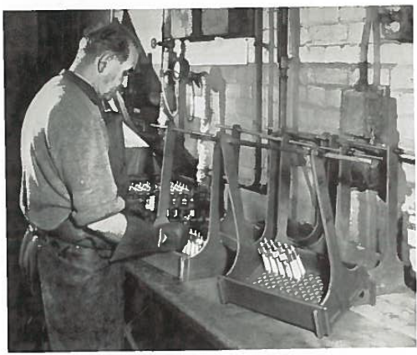